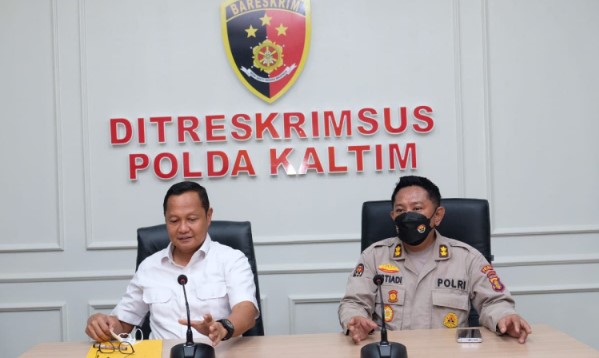 This mining area is in the IUP OP PT TKM area, which is suspected to be fake.

The Director of Special Criminal Investigation, Commissioner Indra Lutrianto Amstono said that the disclosure began with a report from the public.

The illegal production of coal mining used one excavator unit and has able to produce around 1000 MT coal.

"We also secured three people at the mining site, which TM, T and F," explained the former Director of the North Sulawesi Police Narcotics Investigation.

Police Commissioner. Indra Lutrianto Amstono said that until now police officers have examined those three suspects who have their own respective roles.

TM is a miner while also the financier of the mining, T is an operator, and F is a mine guard.

In carrying out its action, TM entered into a coal mining operational cooperation agreement on December 17, 2021 with B, who is the President Director of PT TKM.

TM, despite knowing that the legality of PT TKM's IUP OP is problematic/fake, still carries out coal mining activities for sale using another company's license.

The three suspects were charged with Article 158 of the Republic of Indonesia Law Number 3 of 2020 concerning amendments to Law Number 4 of 2009 concerning Mineral and Coal Mining with the threat of a maximum imprisonment of 10 (ten) years and a maximum fine of Rp10 billion.