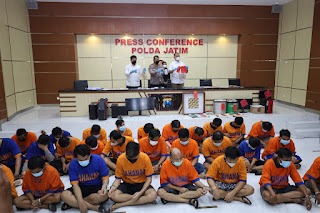 Tribratanews.polri.go.id - The East Java Regional Police revealed 327 gambling cases during the period January to August 2022 and named 500 people as suspects.

Head of Public Relations of the East Java Police, Commissioner Dirmanto, said that from January until August, the East Java Regional Police and their ranks have handled 327 police reports related to gambling. Of the 327 cases, there are online gambling, dice, and lottery, and of those hundreds case there are 500 suspects.

Regarding slot gambling, Dirmanto admitted that his party had taken firm actions.

However, the middle-ranking National Police officer could not specifically specify the number of suspects and the slot gambling case. He confirmed that all the suspects were dealers of the gambling.

Specifically for lottery gambling, some of the arrested suspects are retailers. "All of them are dealers and retailers when it comes to lottery gambling," said the Head of Public Relations of the East Java Police, on Monday (15/08/2022).

"This disclosure is expected to provide a deterrent effect and prevent more people from falling into the world of gambling," explained the Head of Public Relations of the East Java Police.