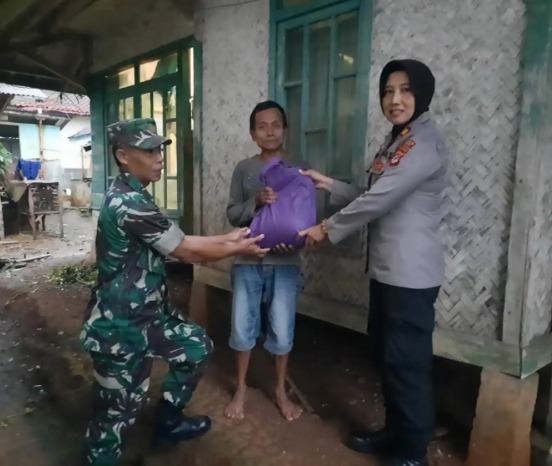 Tribratanews.polri.go.id – Jabar. The personnel of the Rajadesa Police distributed daily supplies to people in need in the Sinarbaya Village, Rajadesa District. The hand over of the aids was given directly to the people, Sunday (25/9/22).

In the distribution of this assistance, members of the Rajadesa Police cooperated with the Rajadesa Military District Command, where Bhayangkara Security Unit and Babinsa of Sinarbaya Village handed over the aids to the people affected by the fuel price.

Rajadesa Police Chief, AKP Iis Yeni Idaningsih, said this assistance was a manifestation of the Police and the army's concern for the community amidst the situation where the fuel price is getting high. The assistance of four tons of rice was distributed to the people of Ciamis.

Head of Public Relations of the West Java Police, Commissioner Ibrahim Tompo, hopes that this assistance can be useful and slightly ease the economic burden of the community.

"Hopefully what we gave to the people can be useful and help ease their economic burden amidst the fuel price adjustment," closed the Head of Public Relations of the West Java Police.