Pringsewu PPA Unit Arrest a Suspect Who Impregnates a Minor 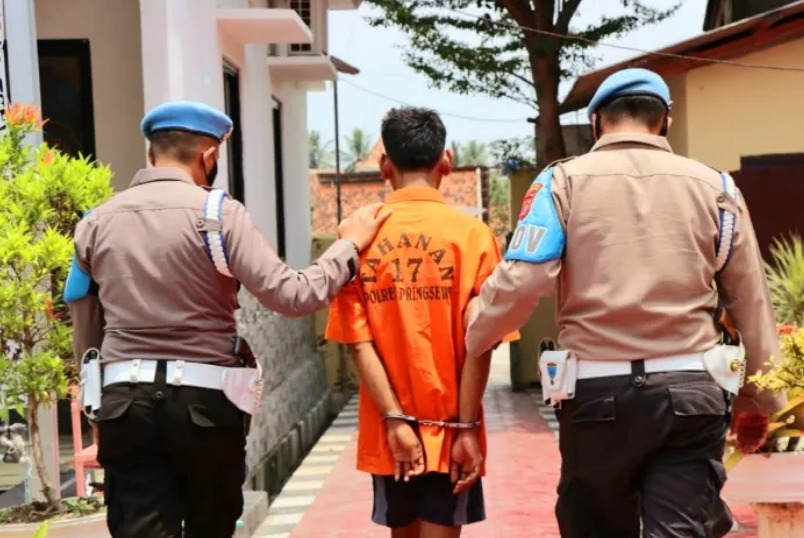 Tribratanews.polri.go.id - The Women and Children Protection Unit (PPA), backed up by Anti-bandit Special Unit 308 of Criminal Investigation Unit Pringsewu Police, managed to secure an alleged perpetrator of sexual intercourse with a minor.

The perpetrator with the initials of MM (20) is a resident of Sukoharjo III Village, Sukoharjo District, Pringsewu Regency. The Head of Criminal Investigation Unit, Iptu. Feabo Adigo Mayora Pranata explained that the suspect MM was arrested by the police on Tuesday (20/9/22) around 01:00 a.m. in the morning at a boarding house in Pekon Sukoharjo III.

He was arrested by the Police after allegedly having an intercourse with a minor whose still a high school student. Because of his action, the girl whose still 15 years old, is now pregnant with 7 months of pregnancy.

"Yes, it's true that PPA Unit has arrested a man with the initials of MM. He was arrested after allegedly having a sexual intercourse with a minor," said Iptu Feabo to the media crews on Wednesday (9/12) noon.

Iptu also revealed the chronological order of how the two met and ended up having a sexual intercourse. The two first met online, and then after awhile they decided to have a relationship. Under the basis of those relationship, both of them have been doing the intercouse four times. The intercourse happened through January to March 2022.

The suspect's depraved act was exposed after the victim's aunt saw the conversation of the two in the victim's cellphone. The short message revealed that the suspect asked the victim to have a sexual intercourse.

"After being interogated by the girl's family, MM admits that they have been doing it several times. The girl's family who can't accept it then reported MM to the police," said Ipti Feabo.

In front of the police, MM stated that he have been doing it for four times, twice in the girl's house, once in the suspect's boarding room and once was in one of the kindergarten classrooms in the Sukoharjo sub-district.

According to the suspect, he was desperate to have intercourse with the victim because he was unable to contain his lust. In order for the victim to comply with his wishes, the suspect promised to marry the victim.

To account for his actions, the suspect has now been detained at the Pringsewu Police detention center and charged with the child protection law.