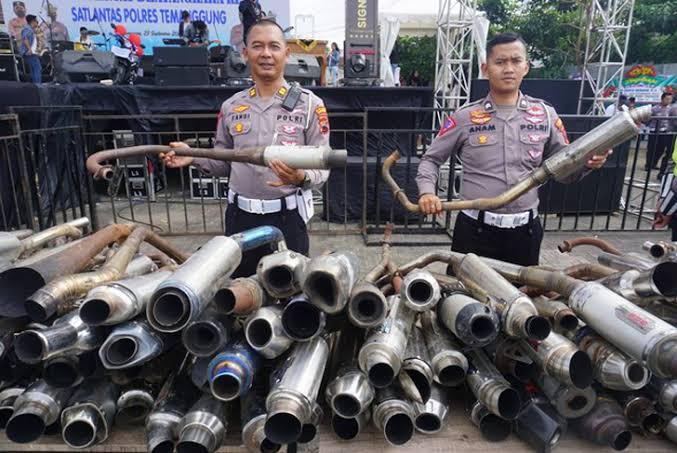 Tribratanews.polri.go.id - Central Java's Director of Traffic (Dirlantas), Commissioner. Pol. Drs. Agus Suryo Nugroho, S.H., M.Hum., His party took firm steps regarding traffic violations, especially the use of Brong exhaust. He emphasized that in the jurisdiction of the Central Java Regional Police the usage of Brong exhaust (non-standard) is prohibited because it is deafening and disturbs the peace.

Central Java's Director of Traffic said in all jurisdictions of the Central Java Police they have confiscated 140.000 Brong exhausts which were secured from 35 regencies/cities in Central Java. He also emphasized that in the political year near the general election, the usage of Brong exhaust which is usually found in campaign parades would no longer be allowed.

"We have secured a total of 140.000 Brong or non-standard exhausts from all areas of Central Java. So later in 2023 political year, there will be no more Brong exhausts that disturb the public," said Central Java's Director of Traffic, on Friday (23/09/2022).

Next up, Commissioner. Pol. Drs. Agus Suryo Nugroho, S.H., M.Hum., also appealed to the public not to violate traffic, because some vehicles are involved in accidents due to not driving safely. For example, the brakes malfunctioned, and so on. Apart from vehicles, safe roads are also needed.

"The most important thing is the road users are driving safely. So there are two factors in the Brong exhaust, there is the aspect of traffic violations, and there is the aspect of juvenile delinquency. So regarding non-standard exhaust, firm action must be taken. They don't have to be ticketed. Just called and given an explanation because it is noisy and disturbs traffic law," said Central Java's Director of Traffic.

Currently, the Central Java Police have also implemented ETLE Mobile Precision and National ETLE. National ETLE is a static one installed at a crossroads, while a mobile one uses a cell phone. Those tools are used to monitor traffic conditions and violations.

"However, I hope that the people, even though there are no police, will remain lawful, because the law will save the children. Temanggung Regency is quite lawful and controlled, but the number of victims who died due to accidents is still quite significant. So let's develop a lawful traffic culture," said Central Java's Director of Traffic.