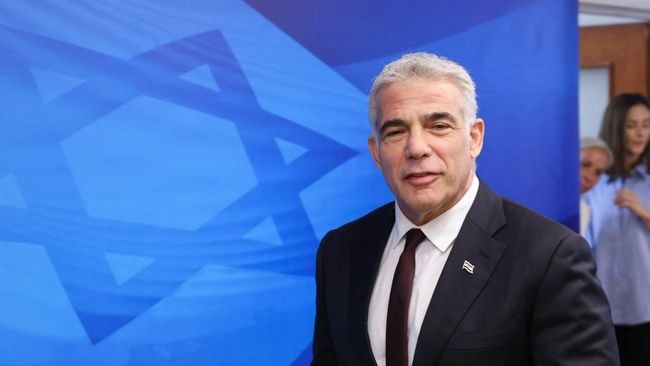 Tribratanews.polri.go.id -  Israeli Prime Minister Yair Lapid called on Indonesia and other Islamic countries in the world to make peace and recognize his country. In his speech at the 77th General Assembly of the United Nations (UN) in New York, Lapid stressed that Israel seeks peace and friendship with its neighbors in the Middle East as well as Islamic countries in the world.

"The Middle East is our home. We are here to stay. Forever. And we call upon every Muslim country — from Saudi Arabia to Indonesia — to recognize that, and to come talk to us. Our hand is outstretched for peace," Lapid said in his speech on Thursday (22/09/2022).

In his speech, Lapid showcased Israel's achievements in normalizing relations with several Arab countries in the last two years, such as Bahrain, the United Arab Emirates, to Morocco, and Egypt.

“History is determined by people. We need to understand history, respect it and learn from it. But also to be willing and able to change it. To choose the future over the past. Peace over war. Partnership over seclusion and isolation," said Lapid.

According to Lapid, Israel's normalization with these countries has succeeded in "changing the face of the Middle East today". So far, Israel's relationship with Arab countries and other Muslim-majority countries in the world has been hampered by its conflict with Palestine.

Most Arab countries and Islamic countries such as Saudi Arabia, Pakistan, and Indonesia do not recognize Israel as a state as a form of solidarity for the independence of Palestine.

However, in recent years, a number of Arab countries have begun to open up and even establish diplomatic relations with Israel. Israel also continues to show its desire to be closer to Arab countries and other Muslim-majority countries, such as Indonesia. In recent years, a number of senior Israeli officials have even more openly claimed that Tel Aviv and Jakarta are working to normalize relations between the two countries.

In a speech at the United Nations, Lapid also emphasized that Israel is always open to achieving peace with the Arab world, including its closest neighbour, Palestine. Lapid also stressed that a peace agreement with Palestine based on a two-state solution is the right step for the security, economy and future of Israeli children.

The two-state solution is one of the resolutions to the Israeli-Palestinian conflict that has so far been agreed upon by the international community. The solution plans to make Israel and Palestine live side by side as mutually sovereign states and coexist.

“Despite all the obstacles, still today a large majority of Israelis support the vision of this two state solution. I am one of them,” said Lapid.

"Peace is not a compromise. It is the most courageous decision we can make. Peace is not weakness. It embodies within it the entire might of human spirit. War is surrender to all that is bad within us. Peace is the victory of all that is good," he added.

Efforts to reach a two-state solution between Israel and the Palestinians have long stalled. Palestinians and human rights groups accuse Israel of continuing to expand its occupied territories, especially in the West Bank. There have also been several brief wars between Palestinian militias in the Gaza Strip and the Israeli military, which worsens prospects for peace.