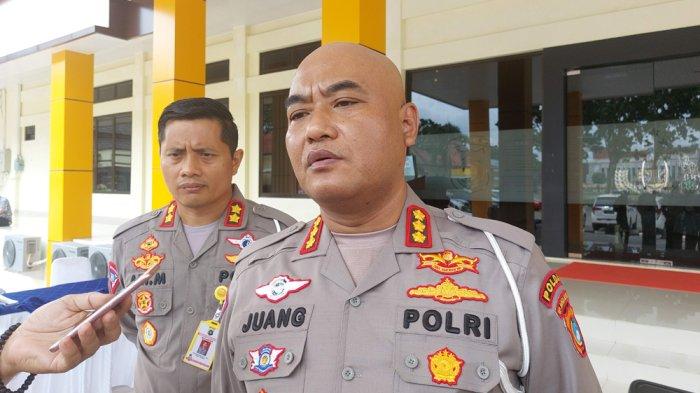 Tribratanews.polri.go.id - A number of regions in Indonesia, have begun to implement an electronic traffic ticket system or Electronic Traffic Law Enforcement (ETLE) Mobile which has the same function as the camera ETLE.

It is known that this electronic ticketing system records various violations that may be committed by vehicle drivers. ETLE Mobile will be placed in police officers' uniforms or vehicles, so ETLE Mobile is dynamic because its movement continues to change from one place to another, following the patrol area carried out by the officers.

Bangka Belitung Police Director of Traffic, Commissioner Juang Andi Priyanto said that the Babel Police had not been able to implement ETLE Mobile because of the facilities and infrastructure constrain. "The ETLE mobile hasn't been delivered from Korlantas Polri. The equipment, facilities, and infrastructure are developed by the headquarters because the costs are quite high," he explained, Friday (23/9/22).

However, said the Commissioner. Pol. Juang Andi Priyanto, if the government in Babel is able to finance it, the Babel Police will immediately implement it. "Unless there is local government support. If there is no support, We will wait for the one from Headquarters. We have submitted it, from vehicles and infrastructure. But even without the tools, we will introduce them to the public so that later they will not be surprised," said Dirlantas.

Meanwhile, the implementation of the ETLE electronic ticket using cameras that have been installed at four points in Pangkalpinang City so far has been going well. According to the Commissioner. Pol. Juang Andi Priyanto, a motorist who violated traffic in Babel was put in the obedient category in carrying out the rules and will be given their sanctions.

"So far, it's doing great. With the ETLE violations, they pay immediately. They didn't wait until their registration is revoked. It makes it easier for us. During ETLE implementations at several locations, there are no problems occurred," explained Dirlantas.

"Evaluations continue to be carried out regarding this, we also advise the public not to park their vehicles carelessly, for road builders to prepare sidewalks for pedestrians, and for children that are still in junior high school or do not have a driver's license to not drive because there is a high risk of accidents," explained Dirlantas.