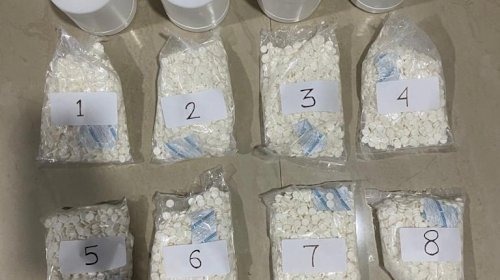 Unit 4 of the Directorate of Drug Investigation (Ditresnarkoba) of the South Sulawesi Regional Police (Polda Sulsel) succeeded in thwarting the circulation of 8,000 hard pills.

The Disclosure was led by Head Unit 4 of the Directorate of Drug Investigation, AKP Suardi. He and his team was able to arrest a suspect with the initials of BN (42) at the UNM/IKIP Lecturer Housing Block D.1 Parang Tambung Village, Makassar, on Thursday (21/09/2022) night.

From BN, Police have secured eight white bottles suspected of containing the hard pills, where each bottle contained 1,000 of hard pills, bringing the total of the hard pills into 8,000 pills. In addition, the police also secured three cellphones.

BN then was brought to the the South Sulawesi Police HQ to undergo a further examination process. BN will be charged with Article 196 in conjunction with Article 106 of the Law of the Republic of Indonesia Number 36 of 2009 concerning Health.

Director of the Drug Investigation Unit of the South Sulawesi Police, Commissioner Dodi Rahmawan, S.I.K., said that during interrogation, BN explained that he bought 10 white bottles of hard pills from ED for Rp7 million in December 2021 with the intention of reselling them. "He managed to sold two bottles of hard pills," said Commissioner Dodi Rahmawan.

Commissioner Dodi Rahmawan, explained that regarding another suspect, ED, the team had went to his house on Mongisidi street, Mariso district, Makassar city, but unable to find him, and now he is been listed on wanted list.